Korean Immigration Offices and the Drive for Multiculturalism

Today my "Contemporary Korean Culture and Society" class topic was Multiculturalism in Korea. The students had been assigned a group project (3 or 4 people per group), worth 20% of their grade. They took it very seriously (when I arrived at 9:12 for our 9:30 class there were already 7 of 10 students in the room checking to make sure their PPT including video and/or audio files were working). Six of my students are Korean (although one lived for 13 years in the US) and four are Chinese. I made them form a group that had to include one student majoring in English Translation and one student from China (sometimes that is the same thing), as well as one native Korean student. The students presented in the language they are more comfortable using, so that the presentation language even switched back and forth during each group's turn at the podium, but the paper submitted had to be in Korean (the language of the course).

Their assignment was to determine if Korea could become a multi-cultural society. They had to go find foreigners to interview about multiculturalism and prejudice in Korea. No one took a shortcut-- they didn't interview fellow students or professors here. We heard and saw interview snippets (for all but one interview) in Korean, Chinese, and English, and had photos of the audio-only interviewees. Each group was responsible for as many interviews as they had group members, and of those only one interviewee could be white (I prepped them heavily to go look for Chinese--the largest group of foreigners in Korea-- or farmers and marriage migrants in our local farming community). In one group all three group members interviewed people who were all rosy-eyed about Korea (perhaps because they had not been here long), but two of the group members balanced that message out by contributing their own difficult experiences living in Korea. I think the assignment was somewhat sobering for the Korean class members as they heard stories about feeling ostracized (when restaurant staff won't listen to the foreigner order and look at the Korean wife at all times), about pretty horrible working conditions (at a 3D job in a factory), and about a half-Korean child's struggles with the education system (and the mother, who spoke good Korean, eloquently described her frustration). All three groups concluded that Korea wasn't a multi-cultural society yet, but to varying degrees believed it could happen in the future. Honestly I was very impressed with their presentations.

After the students finished (they spoke for nearly an hour, but it was good stuff!) we had a follow-up general discussion that only got really lively when I asked them how it felt to approach foreigners and interview them. I finished the class with a lecture to discuss the changing laws and policies related to foreigners in Korea and presentation of some statistics with an extra focus on multicultural education.

Ironically as soon as I had lunch I had an experience of how Korean laws and policies play out on the ground. I had been putting off going to the Immigration Office to get my residency permit until Karjam arrived since it's such a pain to go there. I have previously visited many of these offices-- in two places in Seoul, in Incheon, and in Daegu. As a general rule, a yearly visit is needed, so I've visited such offices at least ten times (although when continuing the same employment this process is virtually painless, just a waste of time). Despite the increased population of foreigners in Korea -- over 1.5 million at this point-- this process has not been streamlined or improved in any particular way since I last went through it.

Arriving at the Suwon Immigration Office, first of all, it was very difficult to find where to grab a number. Grabbing a number, we looked for an appropriate form. The names of all forms (in slots under glass table tops) were written only in Korean or Korean and Chinese (mind you, these are traditional characters, somewhat different from many characters used in mainland China). At the very least each form could be given a big number and a guideline could be taped to the table top in a gazillion languages explaining which form you need: "Form #1: this and this and this. Form #2: another thing" and so on. The boxes on the form we needed were labeled in Korean and Chinese. There was an English instruction sheet. It did not specify which form it corresponded to, but I presume it was for the one I was filling out. However (in somewhat broken English) it explained "boxes 7-11 fill in your address, phone and cell phone in your home country" but the form did not have any numbers on it, and if you counted, starting from the top, it was obvious that the directions were for a previous iteration of the form and the order of items had been switched (significantly). Since this guideline didn't list the accompanying Korean, it was as good as useless. Above the table top a laminated copy of several forms was hanging, partially filled out. These were also the old version of the form, and had been photocopied so many times the Korean was almost unreadable. 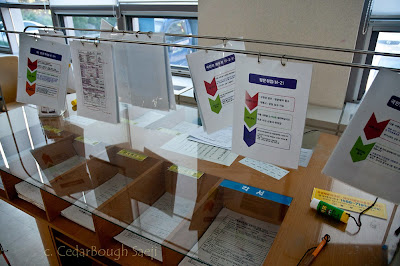 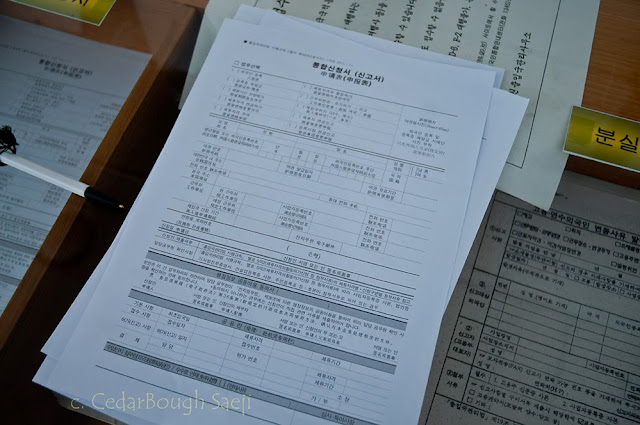 I filled the form out (for Karjam) and then, just to be safe, confirmed the process at the info desk. The staffer there only spoke Korean, although she did tell me (in Korean) that if I wanted the info in English there was an English speaker "over there" (gesturing towards no where in particular). I paid the fee (which is lower than it used to be!!) with their new bank machine method, and then waited and waited for our number to come up. I observed the other foreigners in the room and found that they were either relying on a minder/friend/boss to translate or in some cases they were proceeding through the form as easily as I did (whether reading the Korean or the Chinese I don't know, although most appeared to be Chinese).

But we couldn't finish the process because I had forgotten my passport at home (we realized over halfway there), and K's visa is dependent on mine, so I have to process first. I'll go back tomorrow and try to take some photos for this blog post.

All of this really made me wonder about the government's sincerity in revising their attitudes towards foreigners. An entire huge room of bureaucracy that could easily have had forms available in 20 languages (perhaps with a sign to say "ask here for forms in names of languages" if they were afraid to have all the choices sitting out) instead elected to make an annoying process as troublesome for any foreigner who can't speak Korean (or read Korean or Chinese) as possible. They were polite about it, but the message that in Korea you needed to conform to the Korean way of doing things or GTFO was echoing through the room. I imagined myself as someone only in Korea a couple weeks, desperate to make my new ID (essential to getting health insurance, opening a bank account, getting a cell phone contract and more), and I could feel how stressful that visit to Immigration would have been.

There is a time to assert that in Korea foreigners need to learn some Korean, and at least a basic understanding of Korean culture, but I don't think that is when dealing with bureaucracy in a state that repeatedly insists that it is creating a new multicultural society. I'm the foreigner who will search for the squat toilet in the public restroom (partially because it's more comfortable and better for your bowels) because I don't want to be seen conforming to stereotypes about foreigners. I also get embarrassed to be seen walking around with bread (and yes, it's still hard to find good bread in Korea), insist on the 온돌 ondol room at the hotel (the room where you sleep on the hot Korean floor instead of on some sketchy mattress that can't be laundered), sometimes add an extra squirt of hot sauce to my 회덮밥 (sashimi salad) when someone's watching me dress it, and refuse English translation on principle (even when I secretly hope I understood everything). Because I am that foreigner, who asserts my preference for Korean things, Korean ways, and desire to be treated like a Korean, please do not misunderstand that I think the Korean government should coddle people through life in Korea. But life in Korea and completing your process for becoming a resident, not just a visitor, are two different things. Being sensitive to the difficulties of being new to Korea (as most people in that office surely were) is compassionate and good PR.

A good blog entry on multiculturalism in Korea from the Culture Muncher.
Another blog on the topic of white/English privilege in Korea on Mapping Words.

POSTSCRIPT: When K and I visited the office the second time I did see a copy of the form with English instead of Chinese characters. But the fact that I hadn't been able to find a single one the day before means that others couldn't have found one, either.
Posted by CedarBough at 5:41 AM

This seems relevant, somehow. Mostly because it illustrates such an extreme lack of diversity that you have ... twenty women with the same face!

Curious to get your thoughts.

Oh, it's not quite that bad.

I am also "that foreigner" who enjoys many aspects of Korean culture much of the time, even to the amazement of western friends. And I agree that it is very stressful to phone the expat banking line only to be greeted by a Korean recording, or to have no access to English speakers at an info desk in an international airport. Immigration is one of the few places that should have multilingual staff.

CedarBough
Born in 1972, raised on an island in Washington State, spent 16.5 years in Korea/China/Tibet. Married to Karjam Saeji. Completed a Ph.D. in 2012. Currently a postdoc at UBC, Vancouver.